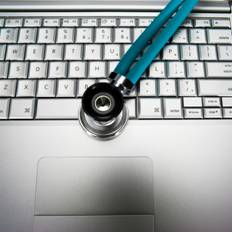 Farzad Mostashari, MD, ScM, the National Coordinator for Health Information Technology for the United States Department of Health & Human Services, addressed attendees of the Summit. Dr. Mostashari discussed the Office of National Coordinator’s initiatives and the future of health information technology, including the launch of a Consumer Health IT Program on September 12, 2011.  More information about the Kentucky eHealth Summit can be found here.

Kentucky was the first state in the United States to award Medicaid incentive money to a hospital and quickly followed in awards to other healthcare providers who completed an attestation of their plan to adopt, implement, or upgrade an Electronic Health Record (EHR) system.  For more information about the Kentucky Medicaid EHR Incentive program, and to read the FAQs and access additional helpful links, click here .

For more up-to-date information about ARRA grants related to EHRs, see the page titled “Grants” which can be found at the top of this blog’s home page.

A complete listing of the Health Information Exchange (HIEs), Regional Extention Centers (RECs) and job training recipients of HIT grants under the Health Information Technology for Economic and Clinical Health (“HITECH”) of the American Recovery and Reinvestment Act of 2009 (“ARRA”) is available through the HHS Newsroom webpage here.  To date, 40 state agencies, 32 RIEs, and 55 job training participants have received awards totaling over $1 billion.

On Thursday, January 21, 2010, CMS announced that Alaska, Kentucky, South Carolina and Wisconsin, would receive federal matching funds for EHR implementation under the American Recovery and Reinvestment Act of 2009 (ARRA).  Kentucky’s grant is $2.6 million.  CMS indicated that the grant will be used to study EHR implementation activities in the state, to establish the state’s Medicaid HIT incentive program, and to evaluate provider eligibility for the Medicaid incentive funds under the HITECH Act, which was part of ARRA.  CMS has now made EHR grants to 14 states: Alaska, California, Georgia, Idaho, Iowa, Kentucky, Montana, New York, South Carolina, Texas, U.S. Virgin Islands, Tennessee, Pennsylvania, and Wisconsin.

Although the HITECH Act allows states to use federal matching funds to establish EHR loan programs for providers who need this avenue of support, there was no mention that the grant money would be used for that purpose.  This could leave some professionals who have a low or non-existant Medicare patient base and an insufficient Medicaid patient base to qualify for the Medicaid EHR incentives (e.g., some pediatricians), without access to EHR stimulus funds under ARRA.

To read the CMS press release on Kentucky’s grant, go here.  Information for this story also was gathered from Healthcare IT News and HealthImaging.com.

On Monday, November 23, 2009, Dr. David Blumenthal, the National Coordinator for Health Information Technology under the Department of Health & Human Services, announced the launch of the Health IT Buzz blog.  The blog is envisioned as a way to reach out to the healthcare IT community and public at large in order to create an open dialogue about the wishes and concerns of the many constituencies that the Office of National Coordinator serves.  The blog will address the wide range of topics impacting the “secure and seamless exchange of electronic health information” across the United States and will include discussions about the “meaningful use” rulemaking and incentives for adopting electronic health records.   We’ve added the Health IT Buzz to our blogroll.

I attended HIMSS Summit of the Southeast in Nashville on September 9, 2009. As is probably no surprise, this was a well-attended conference with some good speakers and engaging panel discussions. Among the excellent speakers was David Goetz, Commissioner of the Tennessee Department of Finance and Administration, who gave a “state of the state” address regarding Tennessee’s preparation to implement electronic health records.

Mr. Goetz highlighted the recent decision by HHS to allocate money to the states rather than use a competitive application process with regard to the award of grants for HITECH “cooperative agreements” that, per CMS, “focus on developing the statewide policy, governance, technical infrastructure and business practices needed to support the delivery of HIE [health information exchange] services.”  Mr. Goetz indicated that using an allocation process rather than competitive applications probably is more fair to those states who are not as far along with e-Health and are dealing with a budget crisis.  States still must file a letter of intent by Friday, September 11, 2009 to participate in this funding.  The actual application is due by October 16, 2009.  Not much time!

Many more details about the grant application process are available here.